This article first appeared on Firstpost.com

Injuries in athletes manifest mostly as two phenomena: a failure to overcome a physical weakness, or an unexpected mutiny by one’s body. The first is hard to take; the knowledge that somewhere, somehow, you have fallen short in your preparation, precipitating internal rebellion. The latter though, is even worse.

The athlete’s body is his best friend, his travelling companion, his livelihood. But if athletes turned into songwriters they would write haunting tunes about the betrayals their bodies sometimes spring on them.

Ishan Porel must have felt betrayed by his body. Not two months ago, the teenager had been unexpectedly thrown into the Ranji Trophy, Indian cricket’s severest competition. And he stood tall, not just because he is six-foot-three. According to Porel, he bowled unchanged from lunch to tea on the second day of his debut game, after bowling more than 20 overs on the first day. His final tally: 47 overs in the first innings, and a four-wicket haul on debut. He played two more Ranji games, followed by a successful Under-19 Challenger Trophy, and was expected to be India’s strike bowler in the World Cup. Even after he landed in New Zealand, he seemed primed for success, with 4 for 23 against South Africa in the warm-up game. 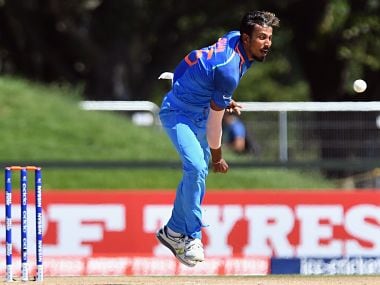 But on D-Day, four overs into an impressive start against Australia, came the betrayal. He bruised his left heel, injuring the soft tissue while landing in his bowling stride, and hobbled off the field.

The hard work Porel speaks of is tradition in his family. Porel is a third generation sportsman. His grandfather, Subhodh Chandra Porel, was a storied kabaddi player in their hometown of Chandannagar. His father too played kabaddi, earning a sports quota job in Eastern Railways. When not watching Power Rangers on TV, the young Porel dabbled in table tennis, swimming, and “the family tradition of kabaddi” before settling on cricket around age 12.

By then, he had made a habit of quitting sports after dabbling in them. Cricket was no different. He almost abandoned it (I felt, ‘kya yaar, bore ho rahe hey yaar’) until his family chastised him for thinking about giving up again. So Porel stuck around, and started appreciating the value of his family’s advice.

Once he got serious about cricket, change became the order of the day. “I started as a batsman, then at my club they made me a fast bowler because of my height. I used to have a wrong-footed action — like Sohail Tanvir — then I was told to change it. It took me just a week to change the action, as the muscle memory was still new.”

If change simply happened to him before, at the NCA camps, he sought it out. “When I first went to NCA, it was horrible. I thought, ‘those guys are too fit’. I was only 14 when I first got the Under-16 NCA call. Those guys were strong and hitting me all over the park,” he said. “I was underweight. Anand (Date, NCA and India Under-19 strength and conditioning coach) sir has been there all through my career, he helped me out with weight training. When I think back to those days, and where I am now, it’s a big margin in term of fitness, bowling, confidence, fielding, everything.”

Starring for Bengal in the Under-19 tournaments earned him a junior India call-up. By the time the World Cup came around, he was identified as the one who would open the bowling for the country in the biggest teenage tournament.

When a press release went out stating that Aditya Thakare, the Vidarbha fast bowler, would fly out to New Zealand and join the squad, it looked like Porel’s tournament was officially over. He stood for the anthems, walked without discomfort in practice sessions, but barely bowled while India played their group games in Tauranga. During the interview, Porel pointed to the jetty that stretches into the bay outside the team hotel. “There’s a place there — I sat there for two hours and I was crying. Alone. Nobody saw me.”

Nobody saw him in the IPL auction either. Kamlesh Nagarkoti and Shivam Mavi wowed the world with 140-plus speeds against Australia. Porel, who is capable of touching similar speeds, could only watch as his partners were picked up by his home franchise Kolkata Knight Riders for a combined price of Rs 6.2 crore. “It feels a bit bad,” he admitted.

Still, the team management took the decision not to send Porel home. “For the boys this was everything they had worked for,” said Rahul Dravid after the final. “Easiest thing for us would have been to send some of them home. We chose to back them. We took those risks.”

There was also a six-day gap between the group stages and the quarter-final, which gave the physio some space to maneuver. And so Porel became hopeful. “The physio said ‘don’t get tensed, nothing will happen’. But from the inside I was hurting. But as the days went by, 5-6-7 days, I got the confidence back.

“Rahul sir, my teammates, used to tell me daily ‘don’t worry, you’ll be fine. Whatever God does is for the good. Just prepare for the quarter-final. From there, it will start for you.”

And there it did. Porel played the quarter-final against Bangladesh. He was clearly down a yard or so in pace, but bowled immaculate lines and lengths, finishing with figures of 5-0-8-0. Against Pakistan in the semi-final, he picked up four wickets to cripple their top order. Still, all the talk in the lead-up to the final was about Nagarkoti and Mavi, and how they were the biggest threats to Australia. But his team, and especially his coach, knew his worth.

“After the semis, Rahul sir spoke to me individually. He told me, ‘don’t think that because you didn’t get IPL chance, and you aren’t able to bowl as fast, you are doing nothing. At this very moment the work you are doing, you’re giving the most effort in the team.’”

It was a big leap of faith from the team management. And it spurred Porel to rise even higher in the final. It was a nervy start from both him and Mavi, with three boundaries being scored by Jack Edwards in Mavi’s third over. Then Porel struck, with a ball that should have gone for four but was hit to cover.

Both bowler and team looked more assured after that breakthrough. With the last ball of his fifth over, Porel got one to climb on Edwards. Edwards stands 6’4’’, an inch taller than Porel himself, so that was no mean task. Edwards did not account for the extra bounce, and hit a simple catch to extra cover.

After Australia had chosen to bat first on a flat wicket, Porel’s opening spell read 5-1-22-2. He finished with 7-1-30-2, the early strikes he made preventing Australia from capitalising on a good position, helping India to their fourth World Cup. What was shattered had become whole again, as Porel returned with no IPL contract, but a winners medal around his neck.

Since retiring from cricket in 2015, Snehal has worked as a freelance sports journalist and broadcaster. She has written for ESPNCricinfo, Firstpost, The Economic Times, Scroll, among others. Through her series ‘Cricket with Snehal’ on YouTube, she shares lessons learned over a 15-year career.

From watching Ashwin bowl on YouTube to playing with him in IPL: The story of Mujeeb Zadran